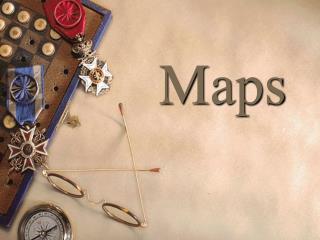 Maps. What is a map?. A map is a representation, usually on a flat surface, of the features of an area of the earth or a portion of the heavens, showing them in their respective forms, sizes, and relationships according to some convention of representation. . Now what does that mean? . MAPS - . chapter 3. 3.1 finding locations on the earth. distinguish between latitude and longitude. explain how latitude

Maps! - . elements of maps—types of maps—how to use maps. geography unit: lesson 2. what’s on a map?. think about