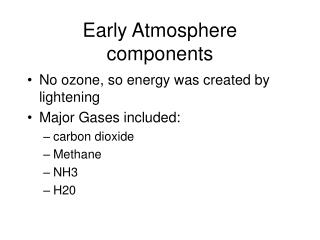 Earth’s Early Atmosphere - . first atmosphere. probably h 2 or he rare on our planet, lost to space because: gravity

Evolution of the Early Earth And its Atmosphere - . stages in planetary evolution. fig. 6.3. 1. planetesimals … small

Common Components between Dimensions of Growth-oriented Atmosphere and Empowerment

Atmosphere - . what is the atmosphere. thin layer of air that regulates global temperature, and filters out dangerous

Atmosphere - . describe a graph which shows surplus and deficit energy. solar insolation: why does only 50% get absorbed

Atmosphere - 78% nitrogen, 21% oxygen water vapor up to 4% by volume leaves atmosphere as dew, rain or snow density of