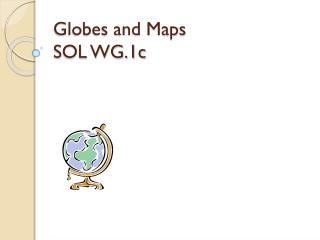 Globes and Maps - . a globe is a scale model of the earth that presents the most accurate depiction of geographic

Maps and Globes - . mr. womack geography. maps and globes. a globe is a three-dimensional representation of the earth. it

MAPS AND GLOBES - . by samantha hepburn [captain] breann gibson [captain]. definition of a map and

Maps v. Globes - . guidelines. maps vs. globes. maps. globes. set up page 9 like this. maps. drawing of the earth’s

Maps vs. Globes - . do you know the difference?. the tools that geographers use the most often are maps and globes. a map

Kindergarten Unit On Maps and Globes - . by tabitha angle and celena chastain. table of contents. rationale

Humans and the Environment – SOL WG 2b - . physical and ecological processes. earthquakes – more common near plate

GLOBES - . map analysis. g lobes: geography shown. what is displayed on the map? what is the map of?. g l obes: legend

Parts of a Map SOL WG.1a - . parts of a map. most maps have the following elements, which are necessary to read and

Parts of a Map SOL WG.1a - . parts of a map. most maps have the following elements, which are necessary to read and