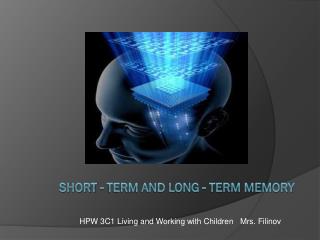 HPW 3C1 Living and Working with Children Mrs. Filinov. Short - term and long - term memory. Types of Memory. Memory takes many different forms. We know that when we store a memory, we are storing information. Short-Term vs Long-Term Memory - . by: tram

Short and Long Term Memory - . chapter 3. short term memory. anything in your conscious mind at any one moment does not

Long-Term-Memory - . in long-term memory (abbreviated as ltm), information is stored from seconds to years, until its

Long-term Memory - . multi-store model proposed by atkinson and shiffrin (1968) suggested that there is a single

Long-Term Memory - . what is the capacity of ltm? is ltm all the same? what can you do to improve your ltm?. long-term