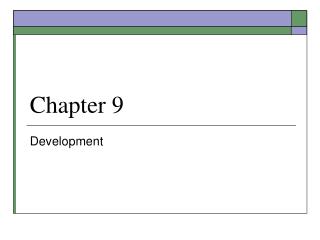 Chapter 9. Development. Let’s Go On a Vacation!. Where would you like to go on vacation? Pick a less-developed destination and discuss that makes it an attractive destination. Make a list of the amenities you would like it to have. Hmm…now ask yourselves:.