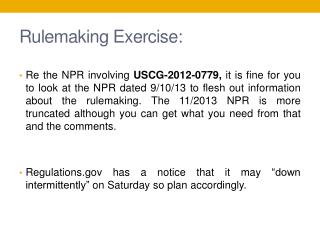 Rulemaking Exercise:. Re the NPR involving USCG-2012-0779, it is fine for you to look at the NPR dated 9/10/13 to flesh out information about the rulemaking. The 11/2013 NPR is more truncated although you can get what you need from that and the comments.

Exercise Metabolism - . objectives. discuss the relationship between exercise intensity/duration and the bioenergetic

Welcome ! - . while you are waiting, please… find in your packet: exercise 6 - questions for the final exercise “what

Redistribution of Blood During Exercise - . shunting or accommodation. blood flow changes during exercise. shunting or