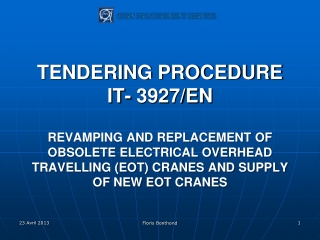 Background to Tendering for NHS Services - . tim parsons business adviser. outline for this evening. background to

A Gathering Storm Procurement, Re-tendering and the Voluntary Sector Social Care Workforce A Study for the Voluntar

The Tendering Process - What is a tender?. a tender is a document by which a company issues a lit of requirements, which

Sublimation Lab Page 402 - . by: paige garcia mrs. la salle chemistry period 3. this is the third lab which i only

Quality Standards and Tendering: - . aim:. to outline the part played by quality standards in the procurement of public

The Winning in Tendering “Tender Review Service” – What’s in it for you? - . ceri evans (mcips) senior supplier

Overcoming barriers to tendering for the voluntary and community sector - Matthew jackson, head of research. what i

Background to Tendering for NHS Services - . tim parsons business adviser. outline for this evening. background to