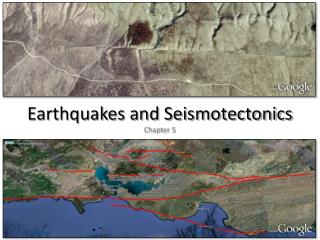 Earthquakes and Seismotectonics Chapter 5. What Creates Earthquakes?. The term “Earthquake” is ambiguous: Applies to general shaking of the ground and to the source of the shaking We will talk about both, but are mainly concerned with the latter Earthquakes occur due to Seismotectonics - . mathilde b. sørensen and j. havskov. the interior of the earth. lithosphere. convection in the

Topic 5: Earthquakes - . do we live in an earthquake area?. where in canada do earthquakes happen?. to study earthquakes

Chapter 10 Earthquakes - . definitions earthquake- the vibration of the ground due to the sudden release of energy

CHAPTER 6: EARTHQUAKES AND VOLCANOES - . lesson 2 : volcanoes. ??. essential questions. how do volcanoes form ? what