What we feared. - PowerPoint PPT Presentation 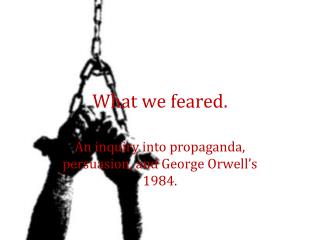 What we feared. An inquiry into propaganda, persuasion, and George Orwell’s 1984. Persuasion and Propaganda . ‘Propaganda’ was first coined in 1622 when Pope Gregory XV established “the Sacred Congregation for Propagating the Faith”.

When I was in school, there was one letter that was feared … I suppose it stood for “ failed ”- - F. when i was in

Fear! - Dealing with. fear!. fear. keeps us from doing what we need to do. can’t serve god the way we should. ruins the

Building Confidence and Overcoming Fear - . communication skills. what is confidence?. confidence is the feeling you have

Whom Shall I Fear - . i will seek you lord while i am in my youth i will serve you lord and i’ll proclaim your truth

“Where angels fear to tread” - . dementia care mapping in elderly care and beyond. carla murray – lead nurse for

Acrophobia - Fear of heights - . by:bizzaro. what is phobia. a phobia is a mainly irrational fear of something. it is not

Is the fear of death appropriate? - . by: kirsten schempp. introduction . throughout this presentation we will be

FACING &amp; OVERCOMING FEAR - . discuss. fear…is it good or bad? . “there are two types of people in the world:

Fear Clauses - . i’m afraid we have to learn them. what is it?. a fear clause is a subordinate clause denoting fear or

The Victorians - . queen victoria was born in 1882. she had eleven brothers and sisters. when she was young she was never