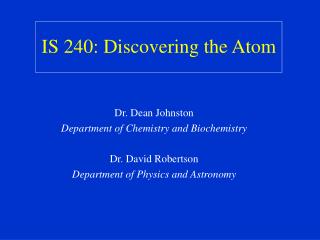 IS 240: Discovering the Atom IS 240: Discovering the Atom. Dr. Dean Johnston Department of Chemistry and Biochemistry Dr. David Robertson Department of Physics and Astronomy. Course Overview. Science as a “way of knowing” Focus on the atomic structure of matter How do we know about it? What does it tell us?

IS 240: Discovering the Atom

Welcome to “Discovering Our Heritage” - . &quot;discovering our heritage”. a multi-cultural unit for

Discovering the structure of DNA - . dna = d eoxyribose n ucleic a cid. made out of sugars (deoxyribose), phosphates and

Chapter 3 - . discovering the atom. essential questions. how was the idea of the atom developed historically? what

The Atom - . three basic components of an atom: electrons protons neutrons an atom is mostly empty space, with almost all

Atom Notes - . atom – small particle that makes up most types of matter (one million atoms lined up equals the

The Atom: SECTION 4.2 - . defining the atom . elements are made of atoms atom: the smallest particle of an element that

The nuclear atom - . more than 2000 years ago, the greeks suggested that matter was made up of very tiny (small)

Discovering Atomic Structure - . chapter 3-1. early models of the atom. cut a piece of al foil in ½ again and

6.1 The Atom - . atomic structure nuclear structure. 6.1.1. describe a model of the atom that features a small nucleus

A New Approach to the Atom - . objectives: 1. describe the atomic orbitals in terms of their shape, size, and energy. key