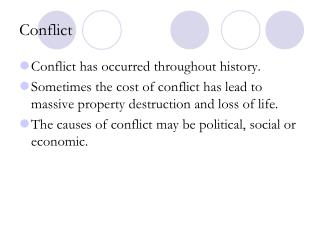 Conflict. Conflict has occurred throughout history. Sometimes the cost of conflict has lead to massive property destruction and loss of life. The causes of conflict may be political, social or economic. Conflict. Religious Conflicts