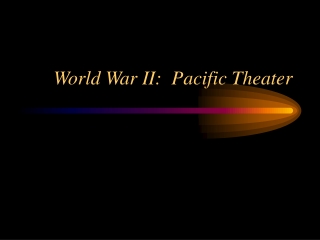 World War II: Pacific Theater. Overview. Where the battle’s were fought Who won those battle’s Outcome of the battle Did it affect the moral Why was the battle fought. Japan’s Rise. Began to become dominate in the early 1930’s Had fought with Russia Invaded China THE GLOBE THEATER - . the globe theater. by the mid-16 th century, the art of drama in england was three centuries old,

Greek Theater - . by michael, lauren, and linda. history of greek theater. in the theater, there were almost always three

World Bank in the Pacific - . participation in adb youth employment, self employment and sustainable development in the

The War in the Pacific - . chapter 25 section 3. objective &amp; do now. objective: understand the war strategy

The European Theater in World War II - . the use of airpower in europe: an overview. us enters the war -- background