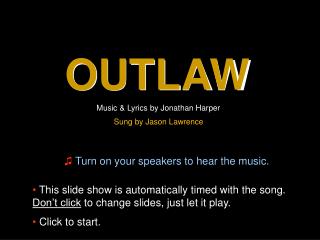 OUTLAW. Music & Lyrics by Jonathan Harper. Sung by Jason Lawrence. ♫ Turn on your speakers to hear the music. This slide show is automatically timed with the song. Don’t click to change slides, just let it play. Click to start. OUTLAW. WANTED Dead or Alive! OUTLAW - . origins and history. outlaw is a magazine that was founded in 2002 and made its name admired throughout the uk

outlaw band - The “bad boys and girls of the bookmobile” group: the story of a band of ruthless, outlaw, renegade

An Outlaw Movement - . luke 4-5. religious sedition on the move…. home town: all the people in the synagogue were

The Outlaw Demon Wails - The fifth book in the rachel morgan series by: kim harrison. the outlaw demon wails. powerpoint

Canada: The Civilized Outlaw - . canadian pro-choice slogans: “keep your laws off my body!” “this uterus is not

The Powe r of Outlaw Faith - . colossians 1. colossae - why are we here?. paul, an apostle of jesus christ by the will of

Brigand (n.) a bandit, robber, outlaw, highwayman - Admonish (v.) to caution or advise against something; to scold

One Outlaw Personal Trainer Coming Your Way - I really didn't want to visit a gym or stress myself by running.i was

Outlaw Music Fest Returns for 2019 Summer Run - The outlaw music festival is hitting the road once again in 2019,