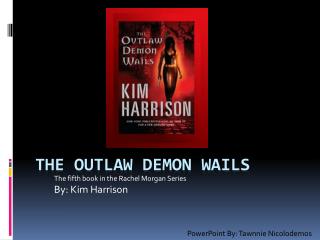 OUTLAW - . music &amp; lyrics by jonathan harper. sung by jason lawrence. ♫ turn on your speakers to hear the

OUTLAW - . origins and history. outlaw is a magazine that was founded in 2002 and made its name admired throughout the uk

The Demon Headmaster - . setting: the setting of a play is when and where it takes place. when do you think this play

The Demon Lover - By: jacob dix. the demon lover. it was a cold summer night when she met the love of her life. he

Canada: The Civilized Outlaw - . canadian pro-choice slogans: “keep your laws off my body!” “this uterus is not

outlaw band - The “bad boys and girls of the bookmobile” group: the story of a band of ruthless, outlaw, renegade

Submarine Demon - . what sort of question does this poem suit?. questions on... nature rejecting something a journey a