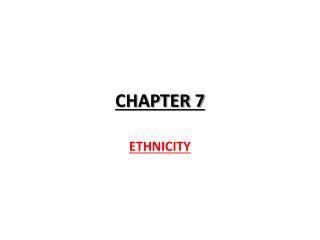 CHAPTER 7. ETHNICITY. What is Ethnicity?. What is ethnicity? How is it different than race? Ethnicity – cultural Race - biological Ethnic groups are tied to particular places Cultural traits derive from conditions and practiced in that homeland. DIFFERENTIATING BETWEEN ETHNICITY & RACE.