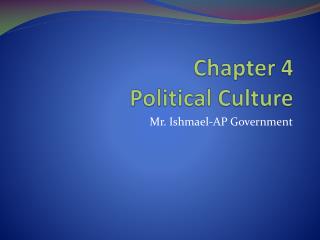 Chapter 2 - Culture what does “culture” encompass? culture = a way of life including…. knowledge, language,

CULTURE AND INTERNATIONAL RELATIONS - . what is culture? can we use it to explain political behavior generally? are

Political Culture - . the widely-shared beliefs, values, and norms that citizens share about their government.

Chapter 3: Music as culture: - . music culture and instrumental timbers. toward a definition of culture: culture is a

Political Culture - . the widely shared beliefs, values, and norms that citizens share about their government. sources of