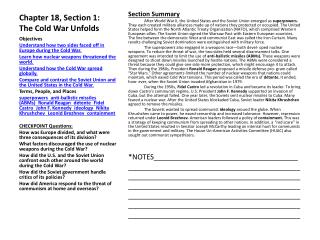 How to tackle the Cold War examination paper - . shs march 2010. three. there are . sections of knowledge to the cold war

Section 3 – Cold Stress and the Firefighter - . explain the terms and concepts associated with cold weather factors and

Chapter 12 Section 3 The Cold War Expands - . 1950’s. us and ussr most powerful nations in the world! great fear

Chapter 4 Section 1 Notes - . the new england colonies. setting the scene. april and may 1630 were cold stormy months in

Chapter 21 THE NEW FRONTIER AND THE GREAT SOCIETY - . section 1: kennedy and the cold war section 2: the kennedy white

The Cold War Unfolds - . chapter 15 section 1. superpowers. after wwii, the usa and the ussr emerged as superpowers –

Chapter 28, Section 1: The Cold War Begins - . main idea: after wwii, distrust between the us &amp; ussr led to the

Chapter 18 Section 1 - . origins of the cold war. problems building between the us and su before and during wwii. former