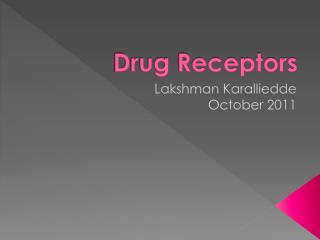 Drug Receptors. Lakshman Karalliedde October 2011. DRUG RECEPTORS. A RECEPTOR IS THE SPECIFIC CHEMICAL CONSTITUENT OF THE CELL WITH WHICH A DRUG INTERACTS TO PRODUCE IT’S PHARMACOLOGICAL EFFECTS. Some receptor sites have been identified with specific parts of proteins and nucleic acids. DRUG RECEPTORS AND PHARMACODYNAMICS - . paul ehrlich 1845-1945 drugs cannot act unless they are bound to receptors.

RECEPTORS - . cellular component to which the drug binds and through which initiates the

Receptors - . receptors. sensory receptors – specialized cells or cell process that monitors conditions in the body or

Metabotropic Glutamate 5 Receptors: Role in drug self-administration - And in regulating the activity of brain reward

Metabotropic Glutamate 5 Receptors: Role in drug self-administration - And in regulating the activity of brain reward

Chemosensory receptors - . chemoreceptors include olfactory receptors. they all have 7 transmembrane domains and form the