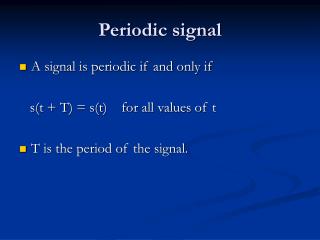 Periodic signal. A signal is periodic if and only if s(t + T) = s(t) for all values of t T is the period of the signal. Analog signal. An analog signal is a continuously varying electromagnetic wave that may be propagated over a variety of media, depending on spectrum. Digital signal. Periodic - . perpetual. purchases are put in inventory account use sales, cash &amp;/or ar plus cogs and mi to record

Periodic - . table of the. the color of the. 6. atomic number. elements. chemical sym-. c. bol indicates the. chemical

Signal : - - is a notification sent to a process to notify it of some event - interrupts whatever the process is doing

Signal - . a signal can be broadly defined as any quantity that varies as a function of some independent variable (e.g.

Periodic Table and Periodic Trends - . test 2 material along with atomic structure: 16 out of 75 mc questions free