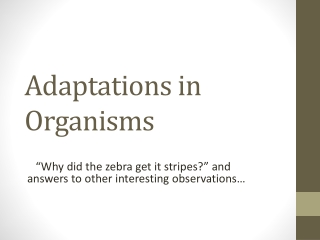 Adaptations in Organisms. “Why did the zebra get it stripes?” and answers to other interesting observations…. What is an Adaptation?. - Adaptations are traits that help organisms survive in their ecological niche or habitat Adaptations can be anatomical , physiological or behavioral Adaptations in Organisms - . “why did the zebra get it stripes?” and answers to other interesting observations… .

Adaptations in Organisms - . transport and excretion. what is it? you breath in oxygen, but how does it get throughout

Interactions among Organisms/Adaptations - . limiting factors resource in an environment is scarce…limits the amount of

An Introduction to Ecology: Distribution and Adaptations of Organisms - . ecology. (from the greek oikos, “home” and

Adaptations…in PLANTS - . plants can adapt too!. plants have certain adaptations to help them survive (ex-a cactus

HOMEOSTASIS IN ORGANISMS - . the disease that results when the hiv virus attacks the human immune system. aids. a

Macromolecules in Organisms - . there are four categories of large molecules in cells:. carbohydrates. lipids. proteins.

Diversity in Organisms - 1. describe the hierarchy of taxonomic

Cells in organisms - . cells are the building blocks of all living things. euglena have only one cell. they live in water

Adaptations - . by ashley. bald eagles. eagles live all over the world , except in cold places. adaptation 1: they are

adaptations - Definition . characteristics that give an organism a better chance of survival. special traits that help