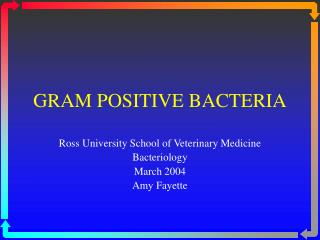 GRAM POSITIVE BACTERIA. Ross University School of Veterinary Medicine Bacteriology March 2004 Amy Fayette. What is the major source of infection with Listeria monocytogenes?. Silage pH over 5.5. What is the morphology of rhodococcus equi?. Gram + Some rods, some cocci. Gram Stain Lab - . purpose : use procedure to identify if bacteria is gram positive or gram negative. this would help

Biology 11 - . microbiology lesson 2: bacteria: the details. objectives. by the end of the lesson you should be able to:

Gram Staining Discussion - . may 27, 2011. let’s practice!. use the sheets given to you and complete a gram stain on

objectives - . to differentiate between the two major categories of bacteria: gram positive and gram negative. to