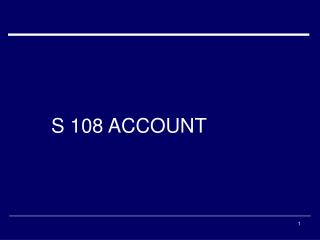 S 108 ACCOUNT. Corporate Tax System. Under the Imputation System, a company is taxed on its chargeable income Dividends paid to shareholders are included as taxable income on shareholders. Chapter 7 - Liabilities. chapter 7. learning objectives. explain the characteristics of a liability. account for

Reporting Account and enrollment changes ( aec ) - . objectives. provide an overview of the types of changes that can be