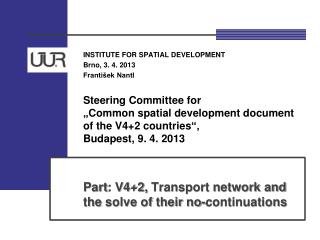 INSTITUTE FOR SPATIAL DEVELOPMENT Brno, 3. 4. 2013 František Nantl Steering Committee for „ Common spatial development document of the V4+2 countries “, Budapest , 9. 4. 2013. Part : V4+2, Transport network and the solve of their no- continuations. Spatial Autocorrelation: The Single Most Important Concept in Geography and GIS! Introduction to Concepts - . .

History of Sustainable Development - . 1987 -the world commission on environment and development 1988 – international