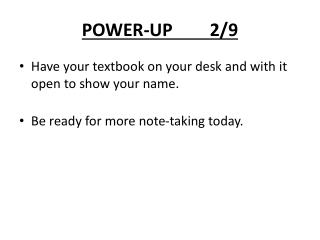 POWER-UP 2/9. Have your textbook on your desk and with it open to show your name. Be ready for more note-taking today. CHAPTER 9. Volcano – are places on the surface of the earth that magma and volcanic gas are released Influence Tactics - Define power and influence. power is the ability to bring about change in one's psychological

Chapter 11 Power and Political Behavior - . the concept of power. power – the ability to influence another person