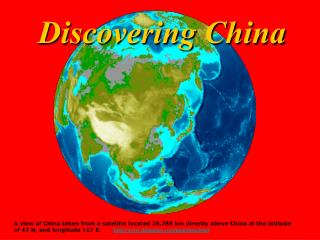 Discovering China. A view of China taken from a satellite located 35,785 km directly above China at the latitude of 47 N, and longitude 117 E. http://www.chinapage.com/map/map.html. Where is China?. U.S.A. China. Where is China?. People's Republic of China. CHINA AT THE UN - . peter ferdinand. structure. significance of un for china voting record of china in un general

How We Got the Bible - . “discovering” the law. general outline. introduction, canon, &amp; inspiration oral

China - . by catherine h. and markus. where is china?. china is in asia. china has the most people. about china. china is

China - . by edward. geography. china has the third longest river in the world. the great wall of china was built over

China Visit - . what you need to know about china. china is communist in name only the chinese like america very much and

China - . by mitchell cann. map of china. language. in china they speak chinese. duh…. religions. in china there is

Discovering Epping Forest - . ‘one of the best days of my life.’. discovering epping forest. academic year 2010 -11 6