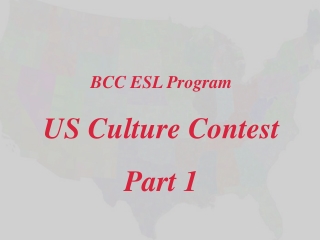 BCC ESL Program US Culture Contest Part 1. How many English colonies were there in North America in the 17th century? 13. When did the colonial leaders sign the Declaration of Independence? July 4, 1776. Who was the first president of the United States? George Washington. BCC ESL Program US Culture Contest Part 2 - . in what month is the president inaugurated ? january. which state was sold

ESL Program Study - . callie foust may 1, 2012 libr 285. why?. research question: how can the library improve services

NYS ESL PROGRAM OVERVIEW - . what is esl?. an english as a second language program is a free-standing language arts

Contest 1/3 - . when did the civil war begin and end?. contest 2/3. who were the rival presidents during the civil war?.

ESL 1 Grammar - . a turningpoint quiz by susan bondra singular or plural near or far 2006. 10. this book is interesting.

Terminology Cells in Culture (PART 1) - . introduction. cell culture : the cultivation or growth of cells outside of the

88th Batch of AAFT Inaugurated By Dr. Bhisham Narain Singh - Noida: “youth is the future of the country. develop good