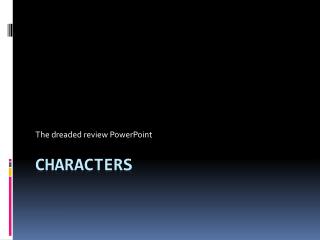 Julius Caesar - . a tragedy in 5 acts by william shakespeare. characters. julius caesar. not the main character

Language: an overview - . meichun liu chinese ii and iii. some basic questions:. what is involved in language? what is

Homology vs. Homoplasy - Homology is any similarity between characters that is due to their shared ancestry. homoplasy

Assalamualaikum! This is a short story with fictional characters … - . … but based on the qur’an and authentic

Types of Characters - . these are the common types of characters we see in literature. round characters flat characters

Literary Terms - . plot. the series of related events that make up a story. exposition. the beginning of the story that

Gluskabe and Old Man Winter - . by joseph bruchac review. 1. drama. a story written to be performed by actors for an

Star Wars: The Clone Wars Characters - . note: try to turn all pages into power points (characters don’t have to be in