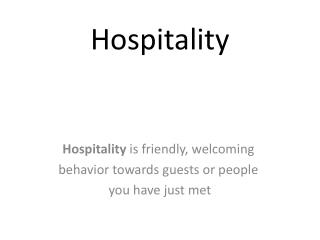 Hospitality. Hospitality  is friendly, welcoming  behavior  towards guests or people  you  have just met. Contents. Different way to greeting in different cultures. Different treatment across the culture. Cautions for behaving someone who has other cultural background. Hospitality - . derived from the latin word hospitare , meaning “to receive as a guest.” it refers to the act of

Hospitality - . unit one. lesson objectives. to be able to describe at least 4 different types of restaurants to be able

Hospitality - The global hospitality market was valued at above $5.5 trillion in 2017. asia pacific was the largest

Hospitality - . the love of strangers. abraham’s hospitality. genesis 18. characteristics. inconvenient he sat at the

Hospitality Pro - Is an effective tool in the search for job opportunities in the hospitality and tourism industry. with

Hospitality Guide - . welcome. on behalf of ever increasing word ministries and emergency revolution, i extend greetings