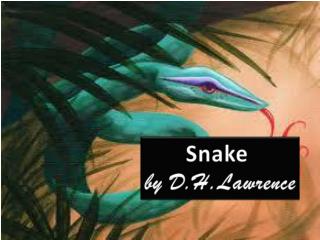 Snake by D.H.Lawrence. A snake came to my water –trough On a hot , hot day , and I in pajamas for heat, To drink there. In the deep, strange-scented shade of the great dark carob –tree I came down the steps with my pitcher THE FOX D.H.LAWRENCE - . title. animal which lives at woods. the fox. its particular charateristics are cunning and

The snake By Jassim - . slimy slipery slurpy snake got . crushed near the roud . ahh ahh

Indigo snake - . by: andrew nickerson. there habitat . they are found in a variety of habitats. but their habitat is

Snake Bites - . introduction. there are over 3,000 species of snakes on the planet, but only 15% are considered to be

Snake Jokes - . t. trimpe 2008 http://sciencespot.net/. can you unscramble the words to figure out the punch line? hint:

Garter Snake - . by jaimin and mitchell . how it moves. the garter snake slithers by shifting its body left and right

Kirtland snake - . by c ody and sean. what do they look like?. it has a dorsal background that is reddish brown a nd is