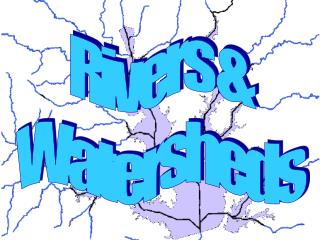 Rivers & Watersheds. What is a watershed?. A watershed is an area of land from which all runoff drains, or ' sheds ' to the same river, lake, or other body of water. A divide, areas of high elevation, separate watersheds.

Watersheds - . reading: discussion: issues facing arizona’s rivers lecture: how you identify a watershed why are they

Watersheds - . a watershed or drainage basin is an extent of land where water from rain or melted snow drains downhill

Watersheds - . prepared by the national weather service great falls weather forecast office. what is a watershed?. a

Rivers - . revision workbook. fill in the diagram below by adding the key words from the list below: evaporation,

Watersheds - . water basics. water is made up of two elements hydrogen oxygen how can we write “water” in a chemical

RIVERS - . meanders. a meander is a turning or winding of a stream incised meanders of dolores river, colorado .

Rivers - . biome assignment by: chelsea grimison and paola blandon pd.3. map . where are these biomes normally

Rivers - . study figure 1 which shows the water balance for birmingham, england. i ) name the months when there is a soil

Watersheds - . investigation one. watersheds. water. h ₂ o one of the most important factors found in ecosystems

Rivers - . odd ones out. which word do you think is the odd one out and why?. urbanisation. deforestation. floodplain.

Rivers &amp; Watersheds - . the streams found in mountains are likely to have formed relatively recently. these young

Rivers - Long and cross profiles processes of erosion, deposition and transportation the characteristics and formation of