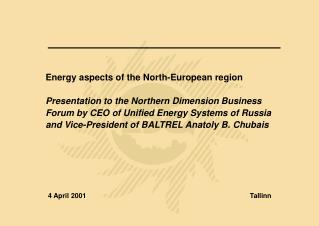 Energy aspects of the North-European region Presentation to the Northern Dimension B usiness F orum by CEO of Unified Energy Systems of Russia and Vice-President of BALTREL Anatoly B. Chubais. 4 April 2001. Tallinn. April 2001 - . an introduction to capital adequacy.

April 2001 - . an introduction to capital adequacy.

Crypto: Some historical and Technical Background April 5, 2001 - . some definitions. plaintext: the unencrypted text

BIOPSYCHOSOCIAL MODEL - . i wake to sleep, and take my waking slow. i learn by going where i have to go . - the waking