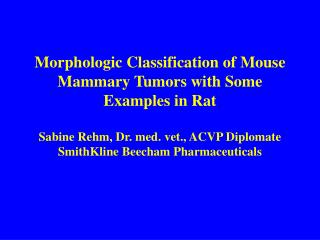 10/29: Text Classification - . classification learning (aka supervised learning). given labelled examples of a concept

Comparison of Discrimination Methods for the Classification of Tumors Using Gene Expression Data - . presented by:

Brain and spinal tumors - . definition. a brain tumor is an abnormal growth of cells (neoplasm) in the skull. a spinal

Tumors - . tumors affecting the visual system are the source of the largest liability claims and judgments against

Dear Sabine, - Sorry i haven ’ t written for ages, but i have a lot of work recently and i be too exhausted to do

Mouse Training - . instruction by: connie hutchison &amp; christopher mccoy. we are going to learn:. what a mouse is.