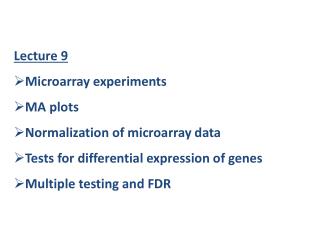 Lecture 9 Microarray experiments MA plots Normalization of microarray data Tests for differential expression of genes Multiple testing and FDR. DNA Microarray . Typical microarray chip. Though most cells in an organism contain the same genes, not all of the genes are used in each cell. Normalization for cDNA Microarray Data - Normalization . to describe the process of removing system variations such as

MICROARRAY DATA - . represented by a n × m matrix. contains the gene expressions for the n genes. of the j th tissue

Classification of Microarray data - . chris holmes with thanks to: jean yang. classification. task: assign objects to

Normalisation of Microarray Data - Motivation. in an ideal experiment no normalization would be necessaryin real world