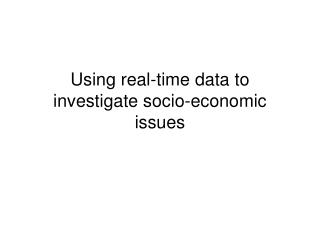 Using real-time data to investigate socio-economic issues. Background. Humans have recognized the impact of atmospheric parameters on crops, fisheries, even their health. SOI. Southern Oscillation Index Indicator of the strength of the Southern Oscillation Using Real-time Data - . what is real-time data?. data that is being collected by scientists, students, teachers, or