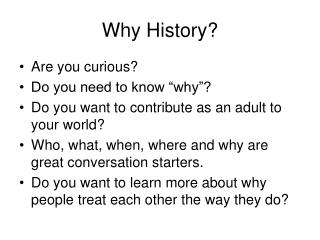 Why History?. Are you curious? Do you need to know “why”? Do you want to contribute as an adult to your world? Who, what, when, where and why are great conversation starters. Do you want to learn more about why people treat each other the way they do?. THE HISTORY OF MIDWIFERY - . group 9. objectives. by the end of this presentation, one should know: the history of