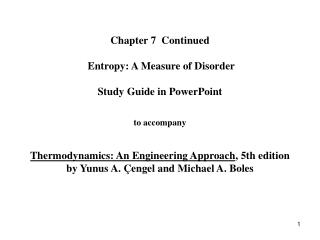 Chapter 7 Continued Entropy: A Measure of Disorder Study Guide in PowerPoint to accompany Thermodynamics: An Engineering Approach , 5th edition by Yunus A. Çengel and Michael A. Boles. Example 7-9 example 7 - . marginal revenue and marginal profit. chapter 1.3. a company produces and sells a product with revenue

example 7 - . multiplying with technology. chapter 7.3. use technology to compute ba and ab if and. 2009 pblpathways.

example 7 - . u.s. executions. chapter 1.2. the table gives the number of executions in the united states for selected

Example 7-12 - . a group of extended bodies, each with a known cm. find the cm of the group. center of gravity. center

Loop Example Cycle 7 - . note: mult2 has no registers names in rs. superscalar processors. what support do we need to

EXAMPLE PROBLEM 7-1 - . a steel shaft is used to transmit torque from a motor to operating units in a factory. the torque