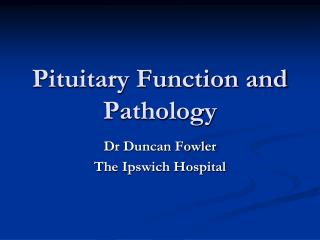 The Pathology of Pituitary - . doç. dr. a. işın doĞan-ekİcİ. anatomy. the anterior lobe develops from an

pituitary - Pituitary. pituitary. these are the most common disorders of the pituitary and

Pituitary and Thyroid - . assistant professor dr. hayder b sahib. the neuroendocrine system, which is controlled by

Pituitary Gland - . austin kr3ss and brian hauserrrr. overview. where is it?????? in the brain, connected to the