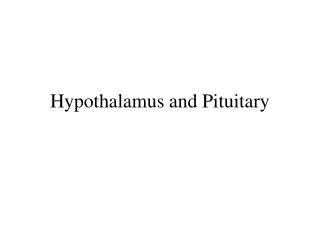 Hypothalamus and Pituitary. Figure 11-3: Autonomic control centers in the brain. Hypothalamus. Integrates functions that maintain chemical and temperature homeostasis Functions with the limbic system Controls the release of hormones from the anterior and posterior pituitary. Hypothalamus. HYPOTHALAMUS &amp; PITUITARY - . george liapakis , phd. the hypothalamus is a small part of the brain. the pituitary

DISORDERS OF THE HYPOTHALAMUS AND PITUITARY - . hormones of the pituitary gland. pituitary: the master gland. the

Outline the Relationship Between the Hypothalamus and the Pituitary Gland - . the hypothalamus acts as a connection