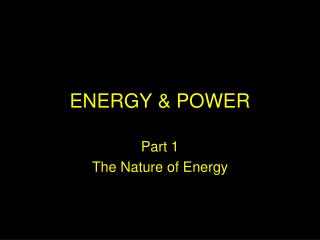 ENERGY & POWER. Part 1 The Nature of Energy. What is Energy?. The ability to do work or cause change is called energy. OK…but what’s work? Work is done when a force moves an object through a distance. TYPES OF ENERGY. The two types of energy are KINETIC & POTENTIAL. The Nuclear Energy Research Advisory Committee (NERAC) of the Department of Energy - . and the future of doe’s nuclear

Energy, Work, Power, and Mechanical Advantage - . intro. what would happen to the force of gravity if you doubled the

Energy in Mining Use, conservation, and renewable - . mine 292 – lecture 24 john a meech. outline. energy use and