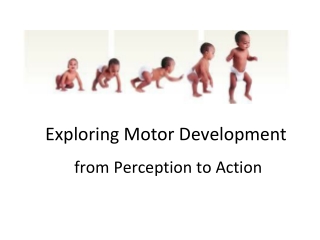 From Perception to Action - . and what’s in between?. a thought problem. “hold it!”, you shout, because you spot

Introduction to Motor Development - . human behavior is not compartmentalized; there is a complex system of

Introduction to Motor Development - . human behavior is not compartmentalized; there is a complex system of constant,

Motor Development - . why study motor development?. contributes to our general knowledge of understanding ourselves and

FROM ASSESSMENT TO ACTION - . the un system in nepal. a land of diversity: topography. culture…. and economy….

From Failure to Action - . october 28. think about this …. what are some big mistakes a person can make in the work

From Theory to Action - . a pragmatic approach to digital preservation strategies and tools. a digital powrr workshop.

From Analysis to Action: - A conceptual framework for country and economic assessment for aflatoxins tulika narayan and