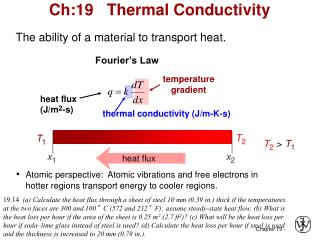 Ch 19 - Blood vessels. ch 19. blood vessels. blood is carried in a closed system of vessels that begins and ends at the

Ch – 28 Current and Conductivity - . current: motion of charge through a conductor. how do we know there is a

Ch.19 - . from stalemate to crisis . gilded age . coined by mark twain- superficial glitter of all the new wealth.

Measurement of the thermal conductivity of sapphire fibers - . takafumi ushiba , m2 tsubono lab., the u niversity of

Ch. 19 - . populations. recall: a population is…. a group of organisms of the same species living in the same area at