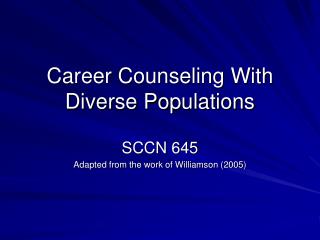 Career Counseling With Diverse Populations. SCCN 645 Adapted from the work of Williamson (2005). Multicultural Career Counseling. Culture can refer to many aspects of life and living Career counseling - . where is it done? by whom? why? how?. career choice considerations and tools. personality - (e.g.