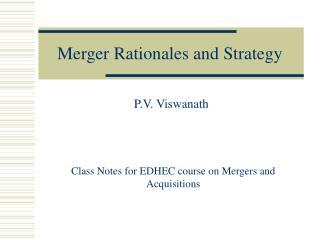 Merger Rationales and Strategy . P.V. Viswanath. Class Notes for EDHEC course on Mergers and Acquisitions. Growth. A reason that is often given for an acquisition is growth. However, there is no clear evidence that growth through acquisitions is necessarily value-increasing. Merger and Acquisition - . what is corporate restructuring? internal method by introducing new products and expending the

Merger And Acquisition - . merger and

Merger - . in this illustration, corporation a and corporation b decide to merge. they agree that a will absorb b, so