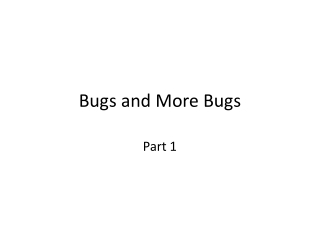 Bugs! Bugs! Bugs! - . vocabulary. chitin – a derivative of glucose that forms the hard exoskeleton of bugs.

Bugs - . wow bugs!. by abigail!. my garden. i have lots of bugs in my garden! some in trees. some on the floor. and some

bugs - . the world is our oyster...!. robots of the future. so. you’ve looked at programming. you’ve researched how

BUGS - . and other insects! . the insect family tree. ants. beetles. grasshoppers. question 1!. what are the 3 parts of a

Bugs - . how to prevent them, how to find them and how to terminate them. cs100. bugs. programming errors first bug a

Bugs and Beetles - . day 6: may 9 th , 2013. objectives:. i can identify and describe terrestrial environments and the

Bugs and drugs - . a summary of pharmaceutical microbiology. four main groups of bacteria (according to sensitivity).

Bugs and Drugs: - A review of infectious diseases and substance use. diana l. sylvestre, ... most common reason for