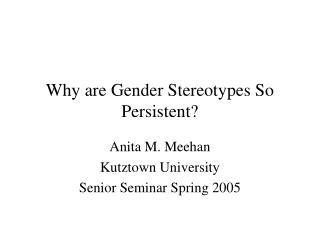 GENDER ROLES - . sex refers to biological differences between males and females; gender refers to the cultural

PICTORIAL STEREOTYPES IN THE MEDIA - . a pictorial stereotype is an image that conveys misinformed perceptions that have

Chapter 9: Gender Inequality - . gender inequality. overarching questions. is gender biological, social, or both? why is

Gender and Sexuality Gender development Human sexuality Sexual orientation: why do we differ? - An evolutionary

Gender Statistics: What is all about? - . angela me unece statistics division. gender/sex. gender refers to socially