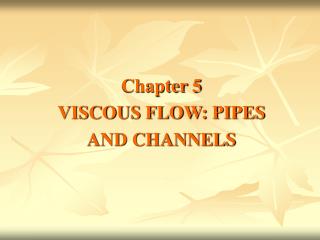 Chapter 5 VISCOUS FLOW: PIPES AND CHANNELS. In Chapter 3 the fluid was considered frictionless, or in some cases losses were assumed or computed without probing into their underlying causes. This chapter deals with real fluids, i.e., situations in which irreversibilities are important.

CHAPTER 23 Mass Air Flow Sensors - . objectives. after studying chapter 23, the reader will be able to: prepare for ase