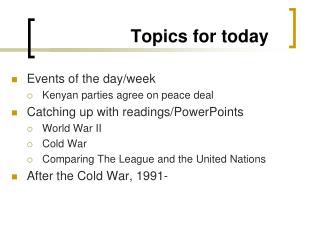 Topics for today. Events of the day/week Kenyan parties agree on peace deal Catching up with readings/PowerPoints World War II Cold War Comparing The League and the United Nations After the Cold War, 1991-. States, sovereignty, and power. What is a “state”? What is “sovereignty”?.

Further Control Structures - . i will go over some important topics today. loops and conditionals are essential for ones

IMPORTANT REMINDER - . did you have evidence that you completed 24 game questions? (3 topics x 8 questions). topic 4: the

Welcome to “ Hot Topics” … formerly known as Refresher Training! - . our purpose today is to highlight a variety of