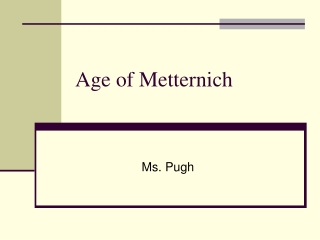 Age of Metternich. Ms. Pugh. Age of Metternich. Dominated by “conservatism” Wanted Europe to forget about Napoleon, the French Revolution, and the Enlightenment Wanted to achieve a “balance of power” in Europe Power between Great Britain, Austria, Prussia, Russia, and France

Age of Metternich - . ms. pugh. age of metternich. dominated by “conservatism” wanted europe to forget about

The Conservative Order and the Age of Metternich - . the empires strike back!. what are these terms? the key to your ap

Ideologies and Upheavals: Europe in the “Age of Metternich” - . 1815-1850. europe after napoleon. congress of vienna

Revolts Against the Metternich System - . through the use of force, the quadruple alliance successfully suppressed most

European Age of Discovery (Age of Exploration) - . what were the causes of european exploration?. gold - desire to

Age of Faith and the Age of Reason - . puritans and the founding fathers believers become thinkers. power vocab. age of

AGE OF ENLIGHTENMENT - . what is it?. a historic period from about 1650 – 1800 a movement where many european thinkers