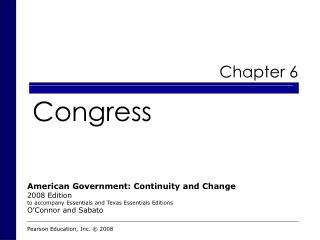 Chapter 6. Congress. American Government: Continuity and Change 2008 Edition to accompany Essentials and Texas Essentials Editions O’Connor and Sabato. Pearson Education, Inc. © 2008. The Constitution and the Legislative Branch of the Government. Article I describes structure of Congress