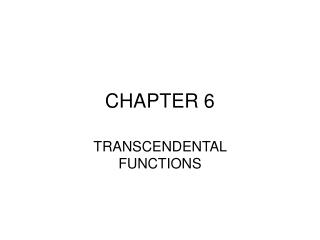 CHAPTER 6. TRANSCENDENTAL FUNCTIONS. 6.1 Natural Logarithm Function. The natural logarith function, denoted by ln, is defined by The domaian of the natural logarithm function is the set of positive real numbers. Geometric Meaning.